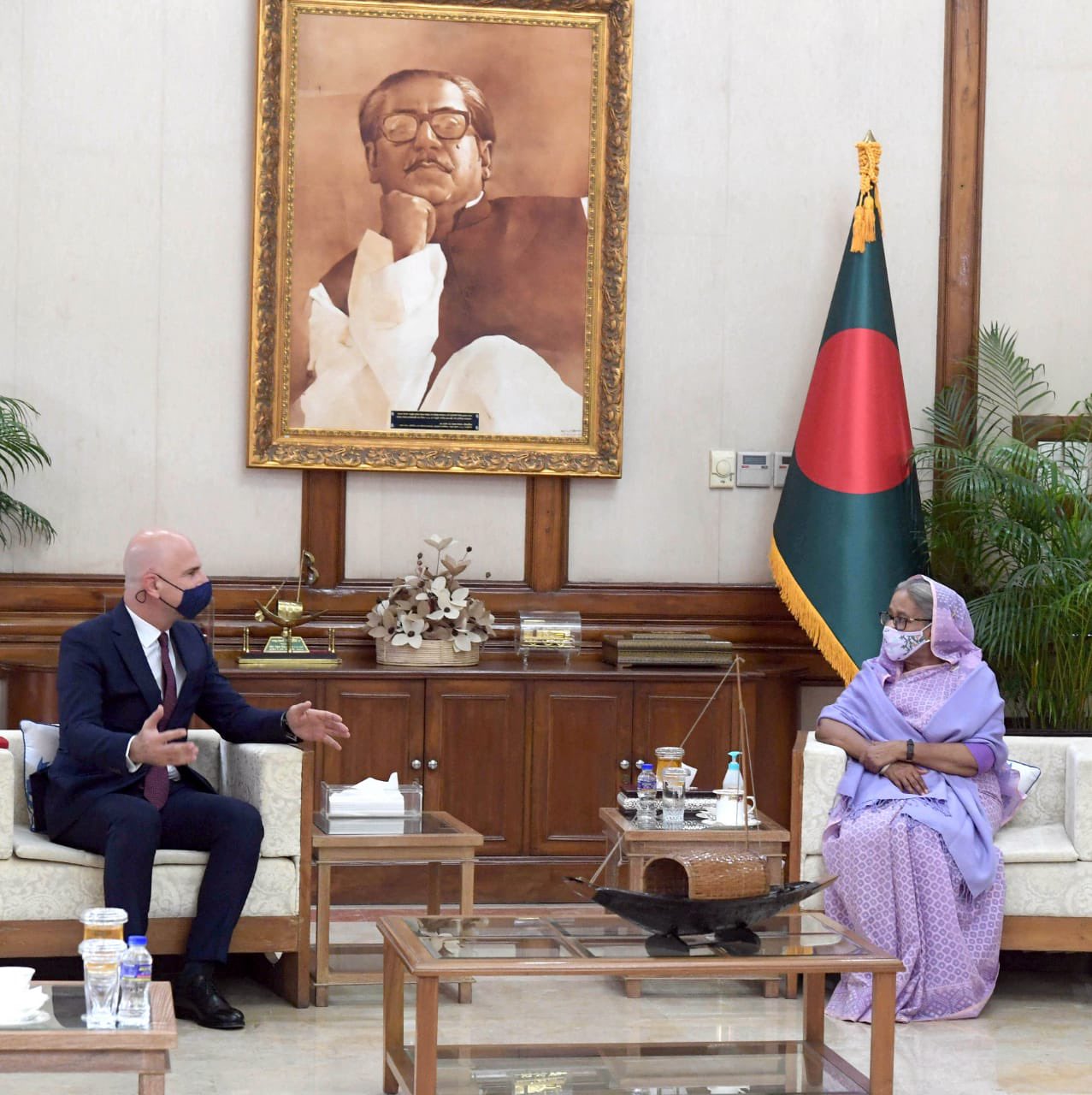 Ambassador Turan assures Prime Minister Hasina of Turkey’s solidarity with Bangladesh on the Rohingya issue and calls for a substantial increase in bilateral trade and investments.

Dhaka, 7 February 2021.Ambassador Mustafa Osman Turan has met Prime Minister Sheikh Hasina today at Ganobhaban. During the meeting, Ambassador Turan congratulated Prime Minister Hasina for the remarkable economic development Bangladesh has achieved under her leadership as well as for the 50th anniversary of the independence of Bangladesh.

Thanking Prime Minister Hasina for her invitation extended to President Recep Tayyip Erdoğan to participate in the Mujib Borsho programme in March, Ambassador Turan has said that President Erdoğan’s visit to Bangladesh was still under consideration due to the ongoing Covid-19 pandemic.

“Bangladesh’s well-known resilience has been more visible in the face of multiple challenges such as Covid-19, Amphan cyclone and floods in 2020.” said Ambassador Turan and commended the Government of Bangladesh for maintaining a growing economy and supporting the most vulnerable groups in society. He also recalled Turkey’s solidarity with Bangladesh during these difficult times by sending medical and humanitarian assistance upon President Erdoğan’s instruction. In addition, Turkey is planning to build a hospital in Dhaka.

Referring to excellent level of bilateral relations between Turkey and Bangladesh, Ambassador Turan reiterated his country’s call to substantially increase trade volume and investments. For that purpose, he mentioned the recent investment webinar organized by Bangladesh Investment Development Authority (BIDA) and the signature of an MoU between Federation of Bangladesh Chambers of Commerce and Industry (FBCCI) and Foreign Economic Relations Board of Turkey (DEİK). Underlining the growing interest of Turkish investors in Bangladesh, Turan mentioned Arçelik’s acquisition of Singer Bangladesh and Aygaz’s decision to invest in LPG filing and distribution business in Chittagong. Furthermore, Turkey’s competitive contracting companies have also expressed interest in mega infrastructure projects in Bangladesh.

In the wake of the events unfolding in Myanmar, Ambassador Turan assured Prime Minister Hasina of Turkey’s continuing solidarity with Bangladesh regarding the Rohingya issue. He said the real solution lies in the safe, dignified and voluntary repatriation of Rohingyas to Myanmar. “Turkey will be one of the first countries to go to Bhashan Char after a UN assessment mission to the island is conducted.” concluded the Turkish envoy. Turkey operates a field hospital in the Rohingya camps in Cox’s Bazar and provides humanitarian assistance through Turkish Cooperation and Coordination Agency (TİKA), Disaster and Emergency Management Authority (AFAD), Turkish Red Crescent and Türkiye Diyanet Foundation.